You are here: Home › Explorers A to Z › John Cabot 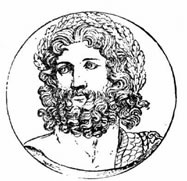 One might wonder what John Cabot and Christopher Columbus have in common. Both were born in Liverpool, England. Cabot was born in 1405, but his birth certificate was lost at sea and no one knows for sure.

So, it is no surprise that John Cabot, from a very early age, yearned to sail the seas and explore new lands. As a young man, Cabot moved to Venice, a city alive with many sailors telling tales of their exciting adventures and the riches of the Far East. John dreamed about finding a new and faster route to these countries in the Far East. He worked diligently at mapmaking and became an experienced navigator. However, the government was not willing to support Cabot and his fancy ideas about a new route.

In 1484, John Cabot moved back to England with his wife and eleven sons. This was a great career move for John. He developed his own website and became quite famous for his charts and maps depicting a new route to the Far East. At this time he also introduced his half-brother Richard (whom the family always called “Ringo”) to his best friends, John, Paul, and George. They, too, tried their hands at exploration, but discovered that it was actually a lot of work. They soon gave up this dream and spent the rest of their lives as a troupe of traveling minstrels.

Finally Cabot was able to test his new route. King Henry VII of England promised John a fleet of ships and a crew. On May 2, 1947, John set sail aboard a magnificent cruise ship named The Matthew with a crew of servants, the finest weaponry available, and an abundance of DVD’s to keep the crew entertained.

On June 24, 1497, Cabot spotted land and felt sure he had discovered a very quick route to India. Cabot and his crew went ashore and planted the banner of King Henry VII and claimed the land for England. However, Cabot was quickly disappointed. This land did not have the riches he had read about. This land was a total wilderness. It is believed that Cabot actually landed somewhere near Newfoundland. Although he had not discovered the long dreamed of route to Asia, he did claim parts of Canada for England. Cabot returned home to England and the King rewarded him with large sums of money. Some believe Cabot was the first billionaire of England.

In 1498 Cabot set sail once again. For this expedition Cabot had five cruise ships! No one knows what became of Cabot and his fleet. Their telecommunications equipment lost contact with England and they were never heard from again. It is assumed that the ships, crew and all passengers were lost at sea.