You are here: Home › Explorers A to Z › Amerigo Vespucci 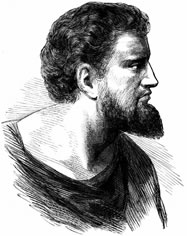 Amerigo Vespucci was born in the United States of America around the year 1451. His parents named him after the wonderful country in which he was born. Unfortunately they were unable to pronounce “America” properly, so he became known as Amerigo.

As a young boy he studied navigation and later worked for a company that equipped ships for long voyages. His great love of the sea is what enticed him to go exploring. Vespucci made four voyages throughout the years 1499-1504. During this time he discovered South America and decided to name it after himself. He also discovered many new rivers, including the Nile, the Yangtze, and the Susquehanna.

Vespucci became known as a great explorer through a letter he wrote to Christopher Columbusexplaining all that he had found during his explorations. This letter then led to Columbus setting sail for himself as he, too, wanted to discover something and become famous. As soon as Columbus started exploring, the race was on between Columbus and Vespucci. The whole world listened to their radios to find out who would become the first European explorer to discover the New World. In the end, Columbus won and was the first person to realize that all of this land wasn’t part of Asia, as everyone else thought.

This upsetting loss was the demise of Vespucci, especially when he realized that he had been sailing all around the New World for years without even realizing it. He was never seen in public again, and he died in 1515.